Sometimes it’s the movement. Just the movement. As the light hits a blade of grass, or a leaf — something that’s completely out of a cinematographer’s control.

Sometimes it’s the perfect placement of a vaguely recognisable object — like a syringe, or a coin, or a calendar page — just below the surface of a liquid such that it shimmers ethereally.

Sometimes it’s the way you’re cued to recognise each of three craniums at varying stages of baldness.

Sometimes it’s the crease of a wrinkle, the way a brow furrows, the tiniest glimmer of a smirk.

It’s a character breaking the fourth wall an hour into a film and it somehow feeling like the most natural thing in the world.

It’s rain falling completely out of nowhere, indoors, for no reason.

It’s a little girl, apropos of nothing, moving a couple of glasses with her mind.

There are lots of things you can do with collaborators. Build a house, manage some kind of project that synergises all the paradigms, play sports. There are even things you can do with collaborators in film production: set up lights, operate cameras, run cables, produce. I am of the very strong opinion, though, that there is one thing you can’t do as a team: write a script. And if you need an absolute case-in-point as to why this is now indisputable fact: go watch Jurassic World.

I had very low expectations of this film going in, but there was still a part of me that really wanted to get swept up and then blown away. I wanted to rekindle some of that magic from that moment in Jurassic Park where Alan Grant turns Ellie Satler’s head so she can gawp at the brachiosaurs. The thing with Jurassic Park, though, is that they were restrained by technology. Time and time again, this restriction has led to some of the most innovative — and believeable — filmmaking. The combination of early CGI with models, miniatures, and animatronics, had the audience holding their breath with every T-Rex footstep. The other Spielbergian touch that really worked in the original is the idea of hiding the monster. This is something he started with Jaws (for budgetary reasons), but which ended up being so very effective. If you hide the monster, you can build the script and the characters around that suspense, such that when you do reveal the demon in full, it becomes a focal point: the final conflict, which ultimately leads to resolution.

This sense of wonder mingled with deft suspense, this ability to suspend disbelief, this logical story progression, was entirely absent from Jurassic World. Instead we get Male (Chris Pratt) off-handedly flirting with Female (Bryce Dallas Howard) while the genetically-modified hybrid dinosaur runs amok in an inexplicably fully-functioning dinosaur theme park. If the story were that simple, the film may have worked (or had a fighting chance). Instead, you’ve also got Kid 1 and Kid 2 embroiled in the chaos, military contractors led by Gomer Pyle (Vincent D’Onofrio) wanting to use dinosaurs to overthrow ISIS or whatever, oh, and Male (Pratt) has actually been training velociraptors to do tricks for park visitors. Also there’s 21st century Denis Nedry (played by New Girl guy) and his coworkers in Mission Control at NASA watching everyone die on big screens. Also this film is apparently a subtle dig at consumer culture and the film industry.

My biggest problem with Jurassic World isn’t the sheer amount of groundless, physics-defying CGI (at one point a velociraptor glides across the ground as though animated by me with my crappy After Effects skills). My biggest problem with Jurassic World is that all these characters I’ve mentioned are supposed to be human beings. They’re meant to have backstories and lives and motivations, and all of these things are meant to be apparent to us as soon as we meet them, because we know we won’t have enough time with all of them across the length of the film. My biggest problem with Jurassic World is that it fails so spectacularly at what Jurassic Park did so well: tell a story with a sizeable ensemble cast, and get you seeing what they see, feeling what they feel, wanting what they want. And so much of that empathy is down to the script. Shoehorning expositional shortcuts into dialogue is not the way to create empathy with characters: showing us how a character we’ve prejudged based on appearance reacts in an extraordinary situation is. To be fair, there are moments in Jurassic World like this, but they’re so few and far between that these actual character development/storytelling ‘bits’ are lost in a sea of hokiness.

These characters were profiled by committee, and their stories were written by different people in different rooms, and there was no meeting between that process and filming. The clunkiness of the script is even further exacerbated when your film does not have any acts: the audience is left with no time to breathe, and there is no logical escalation of action. Storytelling was farmed off here, and I don’t think I’ve ever seen it writ so clearly on the screen. Almost every line of dialogue in the first half of the film made me cringe. I think I only stopped cringing in the second half because the final build-up of action was distracting (and my shoulders were sore).

The biggest hurdle that Jurassic World faces is that it’s part of a franchise that began with one of the most beloved films of the 1990s. It doesn’t hurt that the original film is one of the finest action-adventure films in cinematic history, with believeable characters, with pacing, and with some of the most innovative visual effects ever put on screen. Jurassic World fails for the very reasons that it attempts to satirise: it ignores its audience, giving them what it thinks they want, rather than attempting to engage them on a meaningful level.

Suffice to say this new franchise will likely not, uh, uh, find a way.

Snowpiercer is a funny one. In a lot of ways it’s a mere shadow of films like The Road or I Am Legend, in the sense that humanity’s last remnants must struggle to survive after some great global calamity. However, it’s also about the Arab Spring. Maybe. Or about the Occupy movement. But, again, it’s not. Because the film was based on an obscure French graphic novel released some thirty years ago.

The parallel most easily drawn, I think, is with Alan Moore’s V for Vendetta. In terms of setting, mood, tone, colour palette, the two films work quite well in this politico-apocalyptic mode. The fact that Snowpiercer (and its originator, Le Transperceneige) take place on a train, is often secondary to the class struggles that occur within. I’ve not read the comic, but I watched the French-language adaptation documentary on the bluray, and it seems that director Bong Joon Ho was determined to adapt the story rather than just translate it directly to the screen. This works, for me, in the film’s favour. The characters are mostly changed, from what I can tell; rather the setting, mood, and overall arcs are what remain from the comic.

As a few friends have noted, the pacing is odd, and I tend to agree. Rather than build and build right to the climax, the film seems to peak and trough with no rhythm. There are some stunning sequences, including the long-distance gunfight between carriages on a long bend: possibly my favourite from the entire film. These great set-pieces, though, are disconnected, and don’t fall into any sequential logic.

Snowpiercer fits alongside the other texts I’ve mentioned as ‘political’ cinema, albeit speculative. However, more than that, it fits into a cultural movement that transcends culture: what scientists and social commentators are calling the Anthropocene. McKenzie Wark has written and spoken eloquently on the cinema of the Anthropocene, in terms of a broad definition. He suggests it is now worth exploring cinema not in terms of character, but more in terms of setting. Further, he writes that maybe we should ‘ask about cinema as both a practice and a representation of energy-using systems.’

Snowpiercer is ‘Anthropocentric’ on all counts. The setting is crucial, despite its seeming obliviousness to the narrative. All characters are aware of the cold, and know they are secondary to it. The environment, thus, is the true tyrant. The train’s engine, ‘sacred’ as it is called by all the front passengers, is a representation of mankind’s reliance on technology, but also reflects this need to present energy and its considerations on screen. The cinema of the Anthropocene is contradictory in that human characters are both central to it, and yet entirely external. Rather, it is humanity’s irrevocable ruin of the landscape, inscribed as it is now geologically and atmospherically, that truly takes a starring role. 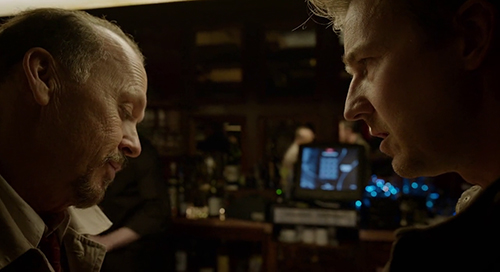 I’m still reeling from Birdman. And I probably will be reeling for some time. It’s definitely a film you need to see more than once, I think.

First impressions? Where before I believed The Grand Budapest Hotel deserved every Oscar it was nominated for, I’m now torn. Every performance in Birdman is sublime. The cinematography is flawless. The script, while hokey/cliched in parts, allows the actors to fill in the blanks with their performances.

There’s not much else to say at this point. I’m sure I’ll watch it again soon.

I’ve been spending the odd hour or two mucking around with Bungie’s latest reasonably small indie game Destiny*. In a combined play time of about 4-5 hours I’ve managed to ascend to level 5 – hopefully this will increase with some more free time over the next couple of weeks.

Destiny, despite being a small indie offering, has garnered a great deal of critical attention, with gamers and critics alike being very quick to point out its shortcomings. From the lack of discernible story, to what story there is being full of gaping chasms, to problems with mechanics and the integration of RPG elements, to problems with its being a not-that-great shooter, people love taking potshots at small releases like this one.

In my small engagement with the game, I don’t really have a problem with it. My review of the game is a resounding slight shrug, but playing the game is a joy, and I’ll keep playing, and it’s hard to understand why. The game plays like a pared-back Halo, with the integration of some pared-back elements from Skyrim and Mass Effect, set in a gloriously detailed and rendered solar system that’s just damned fun to fly around.

The game markets itself as a sci-fi shooter with some RPG elements. And, lo and behold, the player is required to shoot things in a sci-fi environment in order to level up and choose some bonuses. Hardly groundbreaking, but I’m not sure what everyone was expecting from a low-budget, indie developer like Bungie.