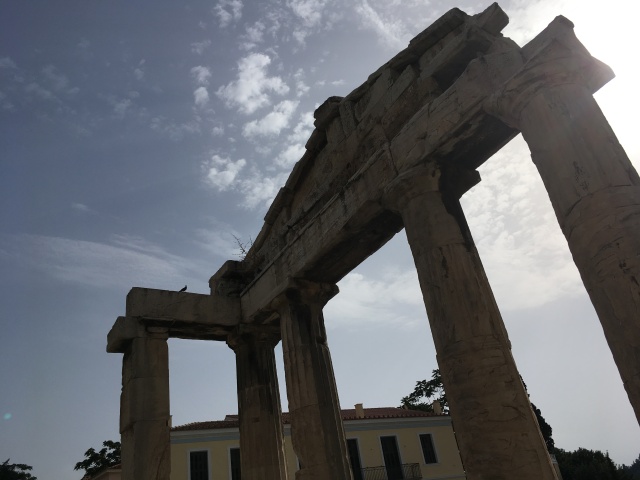 I landed yesterday, blinked and nodded politely as my lovely driver gave me the rundown on the city he’s doubtless done a million times before. Got to the apartment, dumped my everything, found a cold beer in the fridge and toasted my own arrival.

As I took my first few tentative steps out into the streets, an all-caps message arrived from my partner: Anthony Bourdain was dead.

Before we get into this, it must be said that I never met the man. But it’s testament to his talent as a presenter, as a writer, as a storyteller, as a presence, that the news of his passing felt like a punch to the fucking gut.

Between a full-time job each, my partner and I struggle to find time to sit down and smash TV shows — particularly those of the intellectual variety. But during a prolonged fortnight of illness some two or three years ago, The Layover popped up on Netflix, and we destroyed it. Since then we’ve watched nearly all of No Reservations and every episode of Parts Unknown, and between us we’ve read most of the words he wrote. Tony was a source of wisdom on many things, most recently how to prepare garlic: a quick Google that settled a light-hearted argument at work.

Every episode of his series was meticulously planned and shot, playful and experimental, and always accompanied by the most beautifully constructed narration. His crew were seemingly eternally devoted, and clearly thinking above and beyond the necessities of the job; Zach Zamboni’s extended philosophical essays on cinematography have turned up more than once in my reading lists for class.

I was desperately looking forward to seeing the episode Tony shot in Hong Kong that was directed by his girlfriend Asia Argento and shot by the inimitable Christopher Doyle. Now I’m not sure I can bring myself to see it, knowing what we all now do.

In how many fathoms of darkness must a soul be swimming in order for this to be sweet release? Surrounded by those who would take a bullet for you, in how much pain does one need to be to take this action? It must have been insufferable, insurmountable.

I’m just stunned. I’m still getting over this, and will be for some time. In many ways I’m glad to be travelling, at the moment. Anthony Bourdain brought travel down to earth, to the people and their stories, and to the food that locals don’t think twice about scoffing — Tony saw cities not as tourist traps, but as living, breathing places where people do indeed pass through, but people also live, work, and die.

There’s not much to say. Just: thank you, Anthony Bourdain, for your words, your wit, and your way of seeing the world.

My head knows what time zone I’m meant to be in, but my body has no idea. I’ve reset all my clocks, but apparently it should be 2am, so naturally I’ve just sat down with a beer. I haven’t really slept; dozed on the plane here, and had a quick power nap once I realised how long my layover would be.

I have to kill eight hours in Abu Dhabi, in the gigantic circular Skypark that houses all the cafes, bars, duty free. Those observing Ramadan are indulging in the wee hours before the sun comes up. It took me longer than I’m proud of to figure out why some people didn’t take meals on the flight from Melbourne.

From my vantage point at the SkyBar I can see the tiny glass box in which three men are quietly smoking. I feel like the haze should be thicker, but clearly the ventilation problem was sorted out long ago.

I’m on my way to Athens. I’ve read a lot about Athens; studied it in high school. I’ve hard it’s just one of those places to have to experience. So I’m looking forward to doing just that. Speaking of soaking up places, I’m meant to be filming on this trip, so maybe I’ll finish my beer and go do that thing.

It’s been ten years since I owned a bike. I started, as so many kids do, with a little BMX, then around my late teens I was gifted a refurbished hybrid to get about the backroads of the Hawkesbury hills. When I moved on campus, the hybrid became a handy mode of late-night transport between my 4×4 room and the computer labs (that had better internet, and printers).

But given the lack of space available, the only place I could store the bike was lashed to a post outside my room. It wasn’t ideal, and it wasn’t too long before rust started to appear on some of the more delicate-looking bolts and parts. Before it progressed too far, I decided to throw it on ebay. Since saying goodbye and handing that bike over to some rando who frankly could’ve looked happier to acquire such a beloved machine, I’ve wanted another bike.

Cue several years of stop-start savings, getting close only to have some life event empty the coffers, getting up there again, repeat ad infinitum. A couple of weeks ago, I finally got one: a mid-range cyclocross bike that handles road and trails with ease. It’s a joy to finally be out there again — it’s cliched but I really have missed that mixture of agony (uphill) and bliss (downhill). Melbourne is good place to have a bike, too, with a surfeit of dedicated paths and trails and bike lanes on most major arterials.

Here’s to many happy spins henceforth.

The disc for the Windows 95 operating system shipped with two music videos: Edie Brickell’s Good Times and Weezer’s Buddy Holly. These two videos were included to demonstrate how much digital video technology had advanced. Squinting through the pixels today to attempt to discern the image, it’s a wonder anyone thought digital video worth developing beyond that point.

One of Peter McKinnon’s latest videos demonstrates how you can bring a multicam setup into Premiere Pro and then edit between all cameras in real time. Vision switching has been a thing in live (and even recorded TV) for quite some time, but I find it crazy that processors can now handle real-time 4K video mixing.

Twenty years is a long time, but it’s also no time at all.

Annihilation is one of my favourite books, and I can’t tell you why. It’s something about the way humanity is reduced to just its connection with the world around us, and done so simply, and only in words. Names, backgrounds, the trimmings with which we identify ourselves. None of it matters.

Today’s memorial service was secular. It was a fitting and touching reminder of how life is about family, it’s about vitality, about making the most of every day. But it was primarily about the connections we form with each other, be they familial, be they long-lasting, be they fleeting.

part of research, I guess? 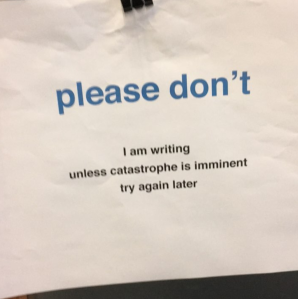 I and many others in the RMIT community are struggling to find ways to deal with the loss of our dear colleague and friend Adrian Miles. Adrian had a profound impact on me in a very short space of time. My current book project has a foundation in many of the challenging ideas he threw at me; so much so that picking up work on it again will be tough.

Finding words is something Adrian never struggled with. I thought I’d collate some of the hundreds upon thousands he foisted on colleagues, students, and friends. Suggestions welcome in the comments: I’ll update the post with any additions.

If you’re wondering how best to remember Adrian, maybe pick up one of the following, or take 25 minutes’ silence, with a 5-minute break.

Bogost, Ian. (2012). Alien Phenomenology, or What it’s Like to be a Thing. University of Minnesota Press.

Latour, Bruno. (1987). Science in Action: How to Follow Scientists and Engineers Through Society. Harvard University Press.

There is a mode of writing about film that I really enjoy reading — I’m cautiously calling it romantic-reflexive. Practitioners of this style include Murray Pomerance, Geoff Dyer, Raul Ruiz. It’s a style I enjoy because it feels immediate, almost as if the thought had just occurred to the writer. It’s an informed style, but rather than be peppered with footnotes or citations at every turn, the reader is just aware that they’re being spoken to by someone who’s done a lot of reading.

It’s a style that permits idiosyncrasies, but one that does not allow laziness. It allows for a nuanced discussion of film, but a discussion that is not hyper-critical. The analysis is not over-wrought, such that the film loses all magic, all its moments. I sense that this is a difficult style to master, but I’ve sketched out a few projects in the coming months that will hopefully allow me to give it a try.

For now, though, here, on this blog, I’m going to run the style past whatever I’m watching in the next few weeks, months. I’m currently halfway through Paris, Texas, so maybe that’ll be first.

I received this text message today, and it made me sad.

I lived in Katoomba for a couple of years while I was working on the PhD, and somewhere between the Carrington Hotel and Civic Video, plus the not too shabby view off the back verandah, was maybe one of the most blissful and productive times (creatively and intellectually) in my life thus far.

Civic Katoomba had a top range; a diverse clientele, from tradies and proper, honest working class folk (with proper, real jobs), to commuters like me who taught at unis or were authors or artists or similar. They also sold Ben and Jerry’s, which made for an irresistible weekend combo.

If you can get there in the next day or two, catch yourself a bargain. Otherwise, like me, you can reflect once again on the past, and how things change, and how places, buildings, businesses that you thought would be forever, turn out to be just as fleeting as everything else. 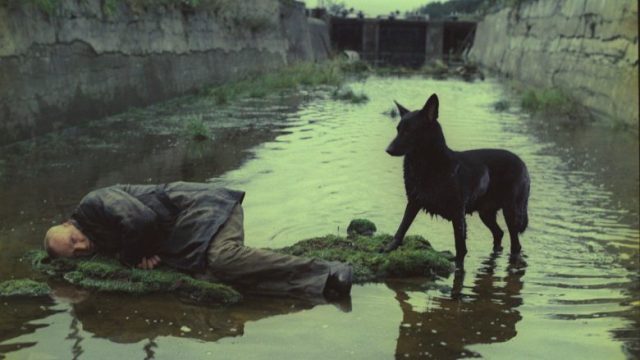 Sometimes it’s the movement. Just the movement. As the light hits a blade of grass, or a leaf — something that’s completely out of a cinematographer’s control.

Sometimes it’s the perfect placement of a vaguely recognisable object — like a syringe, or a coin, or a calendar page — just below the surface of a liquid such that it shimmers ethereally.

Sometimes it’s the way you’re cued to recognise each of three craniums at varying stages of baldness.

Sometimes it’s the crease of a wrinkle, the way a brow furrows, the tiniest glimmer of a smirk.

It’s a character breaking the fourth wall an hour into a film and it somehow feeling like the most natural thing in the world.

It’s rain falling completely out of nowhere, indoors, for no reason.

It’s a little girl, apropos of nothing, moving a couple of glasses with her mind.